The date is July 6, 2016 and the outside world erupted with people crowding parks and city streets. They are all hyper-focused on their phones and tablets, taking a few steps and then pausing where they stand while their fingers interact with the screens. It was the day Niantic released Pokémon GO into the world.

Fast forward to the present date, just a few months shy of Pokémon GO’s second anniversary. The app has lost a lot of traction along the way, but it still holds a large fan base with many loyal players. Mobile apps usually have short lifespans, but Niantic has found a niche that is still very much alive and well.

Personally, as far as the Pokémon franchise goes, I’ve watched the anime on television and had the games as a kid. I grew up pining for the day that pokémon may become real and that I could become a real pokémon master. When I saw the first teaser for Pokémon GO, I was skeptical, but also excited for the idea of seeing pokémon everywhere, even if they were only visible in augmented reality. Once launch day arrived, I downloaded the game and I haven’t stopped playing since.

I use the name ChinoChinako on the Pokémon GO app. I’m level 34 (with 40 being the highest possible level, as of this article), Team Instinct, living in Austin, TX, and I consider myself to be a dedicated player. I play at least once a day, just long enough to spin a pokéstop and catch a pokémon. On the weekends, however, I’m usually more of a hardcore player and meet up with no less than 50 people to travel all over the city raiding the local gyms in-game for legendary pokémon and all the loot that comes along with them.

You may be thinking to yourself, “Over 50 people?! I can’t even find a single friend to catch pokémon with. How on Earth do you know so many trainers?” My secret is the tight-knit community Austin has fostered and I have adopted as my own. We even have a Facebook page, but more importantly, we have a very active Discord channel—PoGo512—where we organize raids, help each other find pokémon to complete our pokédex, and genuinely encourage one another to do our best in the game. 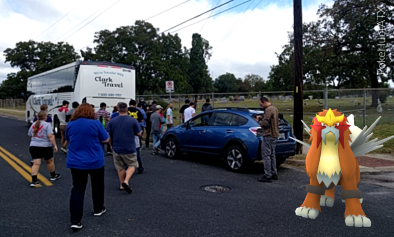 “[The Discord channel] was started by PinkLadyNTX and Warhouse512 in February 2017,” Wtfluffle tells me. He’s on Team Valor, level 37, and has been playing the game since the second day of its release. He is also a moderator of the Discord channel. “I joined a couple months after that. I was made a mod because I was often helping new members with questions.”

Wtfluffle was one of the first members of the Discord channel that I met last summer. He’s always smiling and offering advice on how to best catch certain pokémon or where to go to find one you may be missing.

Ejayne1985 is also on Team Valor and is at level 39. “I had never played the old games or watched the show. I still have only seen a couple of episodes,” she tells me as I ask about how she became interested in Pokémon GO.

“I was reluctant at first, but my friends convinced me to download the app and play with them. They stopped playing after a week or two, but I’m still going!” Ejayne1985 has been using the Discord channel long before raiding was so commonplace in the game.

Another player has a similar experience with how he got roped in to play Pokémon GO, “A lot of my staff at work were playing and talking about how fun it was and they convinced me to join. Two weeks later, they all quit and I’m hopelessly addicted.”

AnonymousATX is already a level 40 and plays on Team Mystic. He was around for the very beginning of the Discord channel and helped to build it up to where it is today. “I left [the game] a few times but always come back for the new stuff.”

And Niantic hasn’t stopped with “new stuff” yet.

Austin also helped jumpstart a raiding experience like no other—the Raid Bus! It was an idea that PokeHuntATX had last year and it’s taken off in HUGE ways! “I was the one who put the bug in Wtfluffle’s ear and asked if we could do a community raiding event on a bus. He did most of the organizing for the first couple of rides and I consulted/helped out. I’ve actually been organizing Pokémon GO buses since the game came out in 2016, so organizing these events on a whim is kinda my specialty.” PokeHuntATX is only 1.4M experience points from hitting level 40 and is on Team Instinct. “After we discovered how many excited gamers wanted to join in on the event, we tried planning bigger and found the charter buses to be perfect for what we needed. It all just kind of evolved from there … I’ve made a ton of new friends and got the chance to raid in almost every city we’ve helped organize buses in. It’s cool to see how every city puts their own spin on the event and makes it their own.”

The Raid Bus idea has grown so large in fact, it has its own Discord channel—RaidHQ—and you can sign up for your bus tickets at http://raidbus.com. Current Texas cities include Austin, Dallas, Fort Worth, Corpus Christi, and Texoma/Sherman. Buses also raid around New Orleans, Los Angeles, and PokeHuntATX has now added Charlotte, NC to this list as well. If you want to catch the legendary pokémon, which require a lot more than one trainer to take down, the Raid Bus is your best bet. All levels and teams are encouraged to hop on board the bus and all the trainers will gladly help with catching any pokémon that seem to be evasive. I’ve been on buses full of families with young children and buses full of only adults. It’s really exciting to see so many different gamers in one place at one time.

Asking about the success of the Discord channel, AnonymousATX is astonished. “I had no clue this many people even played locally, much less be on Discord. And we still get new members daily, [we have] over 8,500 now!”

“My plan is to keep [the Discord channel] going in the same direction, making Pokémon GO more enjoyable for players by filling in the gaps in the play experience as needed.” Wtfluffle tells me. “We’ve adapted to every need we possibly could, first with spawn announcements, then raid channels, then EX-raid organization. So the plan is to keep adapting to the changes in the game and help as many players as we can, new and old.” He cares about the Discord channel and its success in helping others enjoy the game as much as he does. “It’s a very mature and respectful community.”

When I asked Ejayne1985 if she ever expected such a large community of trainers here in Austin, she commented, “Not at all, but that’s part of what makes playing the game so fun, so I’m glad we have such a great community.” I have to agree.

“Every week is a new adventure. We never know what’s going to happen.” PokeHuntATX sums up the success of the Raid Bus and Pokémon GO in one sentence. It truly is an adventure worthy of pokémon masters all over the globe.

If you’re ever in Austin and play Pokémon GO, feel free to let me know and maybe I can accompany you around the city to raid and catch pokémon.

Sign up to get news, announcements, and other fun stuff straight to your inbox.